What is a Geothermal system?

A Geothermal system, properly called a ground-source heat pump system, consists of a heat exchange system buried beneath the ground and a mechanical refrigeration equipment component. The sun keeps the ground at a relatively stable temperature year round and this energy can be harvested efficiently for heating and cooling needs.

How do we use it? 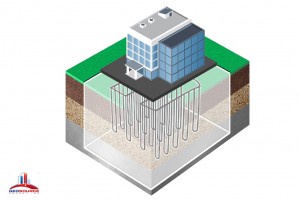 We circulate liquid into 44 wells that are drilled to a depth of 120 meters beneath our parking lot. In heating season, the ground warms this liquid, allowing us to heat our concrete ceilings which then radiate heat into the spaces. When we need to cool the building, heat is absorbed by the concrete ceilings and then released into the ground beneath the parking lot. Our automation system monitors the ground temperature and harvests energy from different parts of the ground to make the system as efficient as possible.

How does it make us more sustainable?

In heating mode, one unit of electrical energy can move 3 ½ units of thermal energy from the ground into the building. A similarly sized high-efficiency boiler will convert one unit of gas into 0.95 units of usable thermal energy, making the geothermal system three times as efficient. In “free” cooling mode, the geothermal system can move up to 300 units of heat from the building per unit of pumping energy. Since installation, this system has replaced 90% of our gas consumption, reducing our carbon footprint by 40%.

A test hole was drilled to verify the composition of the geology beneath the parking lot and its thermal characteristics. The “U-loop” is then grouted in place to exchange heat with the ground around it.

The ERC is generously supported by: